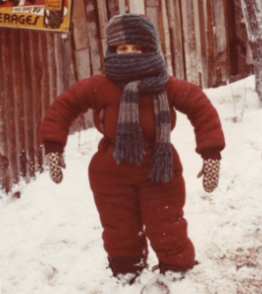 I do enjoy motorcycle trips. Maybe it’s the riding; perhaps the solitude, could be the inevitably scheduled visits with old friends. I think it’s all three.

When I mounted the steed this morning in Central Arkansas, the temperature outside my garage was 27 F. That’s -2.7 for you Celsius people. At 70 mph that comes to a wind chill of 4.75 F. The night before, my wife and I, both, momentarily questioned why I do these things and my best answer was “This is my fun.”

So this morning I donned the thick Smartwool socks, waterproof Tourmaster boots, longjohns, thick Carhartt jeans, Olympia Waterproof rain pants, long sleeve t-shirt, Browning down jacket, Olympia Waterproof armored jacket, Olympia waterproof gloves, and my Arai helmet for my weird, alien-like headshape. I even put Lib’s sheepskin on the seat. I can honestly say that regardless of what wind-chill factor I imposed on myself, I actually stayed warm. In Texarkana I removed the down jacket to stay comfortable in the rising temperature of the sunshiny day.

In the first 30 miles of the trip, between Conway and Little Rock, I witnessed the stereotypes of the 3 types of bikers. I first came across the retro cruiser guy – no helmet, bandana over the bottom half of his face, black leather jacket. Minimal protection from rain, wind, cold, or pavement. As much as I would like to say, “but he looked cool,” he didn’t. He looked miserable, tense and if it weren’t for the bandana over his face and the fact that I was passing him, I’m sure I would have seen water streaming from his eyes and his teeth clenched against the frigid air. Shortly after that, as I was floating along with Lib and still considering Cruiser guy’s doubtless suffering, Joe crotch-rocket zooms by, splitting my lane while I was next to a truck. He must have been doing more than 100. He weaved through the traffic ahead of me the same way and quickly disappeared from sight. I’m the middle ground. Honestly there are lots of cruisers and sport bikes that occupy this area in the middle range of the spectrum, but today it was me, again stereotypical for a european bike, wearing my safety yellow, protective gear, full face helmet etc. Traveling a little faster than the cruiser but still in step with the traffic, rather than trying to blow everyone off the road.

Given a very pleasant late lunch of “street tacos” at a lunch spot in Kilgore, Tx, with an OLD college friend. I didn’t make into the Dallas metroplex before dark. We didn’t get even close to catching up on close to 25 years, but we found that we have grown in similar directions, and neither one of us see much of anything as vitally important as we did in college, except for family. Funny how that works. Pretty much everything but that comes and goes. And family isn’t just blood. It’s commitment. Unconditional love.

The sun was finishing its rounds for the day as I rolled into the Dallas suburbs. The western sky was like a still shot of the aurora borealis and traffic was beginning to pick up, which of course quickened my pulse as I readied myself for heavy Dallas traffic at night-time on a motorcycle. Don’t read that as a negative, though. Read that as exhilerating. Like I said at the beginning of this, This is my Fun. I don’t like sports, movies don’t excite me much, parties I can do without. But give me a motorcycle and put me in an environment where all my muscles are engaged and my senses are hyper-vigilant, and I’m happy. It’s very similar to being a lawyer in a jury trial, except with the added physical element. With the Dallas skyline lighting up the night sky to my left, there were thousands of vehicles on every side of me, all moving at interstate speeds – even above and below due to the multiple high rise ramps and loops. and I was one little motorcycle among them all.

In the middle of it all, I wondered if I enjoy this as much as do because it puts my hard-wired and constant anxiety into an environment where it is reasonable and warranted. Basically, I always feel like the world is a maddening, dangerous place around me but it is somehow a relief to make that feeling “reasonable” once in while. Like that’s the only time I’m normal. Just a thought.

Anyway, I made it to my two-star hotel room alive and now I think I’ll take my anti-anxiety med and go to sleep.

One thought on “lib does dallas”