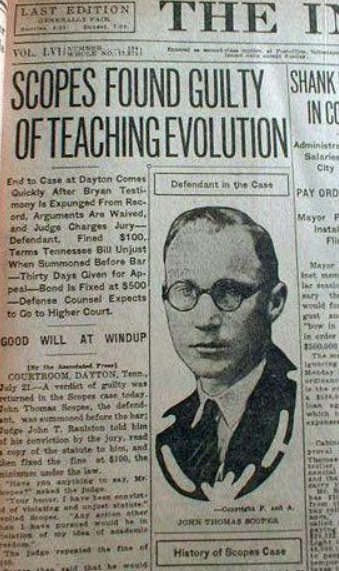 When I last left this keyboard, I was suggesting that a lot of Christians seem to be blaming everyone but themselves for perceived problems with religious liberty in the U.S. and that maybe that should be re-examined. I admit that this is a slightly bold assertion so I will present it carefully.

Consider the teaching of evolution versus creation in public schools. The judicial case that comes to many people’s minds on this subject is Tennessee v. Scopes, known as the 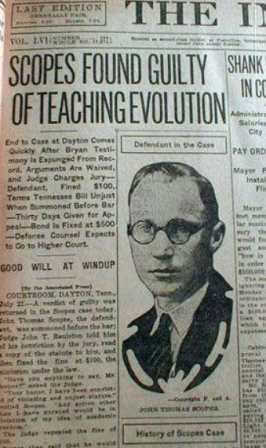 Scopes Monkey Trial. While many people have a cursory knowledge that the case was about evolution v. creation being taught in schools, that’s about where the awareness stops. As is always the case, the relevant facts began long before any courtroom was involved. I’ll keep this brief to avoid inducing coma in readers.

The Butler Act was passed in Tennessee in 1925. It criminalized and sanctioned the teaching of evolution as follows:

That it shall be unlawful for any teacher in any of the Universities, Normals and all other public schools of the State which are supported in whole or in part by the public school funds of the State, to teach any theory that denies the Story of the Divine Creation of man as taught in the Bible, and to teach instead that man has descended from a lower order of animals.

The act made any violation a misdemeanor. It didn’t simply prohibit the teaching of a particular scientific theory propounded by Darwin, or DeVries, or even Lamarck – the Tennessee Legislature outlawed the teaching of any theory that denies the story of creation as given by the Bible. Not the creation story of the native american tribes, or the Hindus, or the Buddhists, or anyone else – just the Bible – and they meant the Christian Bible. This law came after the Declaration and the Constitution discussed in #6 and #7.

This law seemed to be an effort by Christians to force the Christian scripture (the stuff I believe) into government schools, to the exclusion of any other theories or beliefs. The case was argued and the court gave a ruling summed by the following:

We are not able to see how the prohibition of teaching the theory that man has descended from a lower order of animals gives preference to any religious establishment or mode of worship. So far as we know, there is no religious establishment or organized body that has in its creed or confession of faith any article denying or affirming such a theory. — Scopes v. State 289 S.W. 363, 367 (Tenn. 1927)

The Court avoided the clear language of the legislation to render it Constitutional. The Tennessee statute wasn’t simply prohibiting the teaching that man descended from a lower order of animals, it prohibited anything contradicting the Bible. But it stood, and it wasn’t appealed further. The Christians were “forcing it,” and they won.

Interestingly, it wasn’t just in Tennessee where Christian legislators were excluding any but the Christian creation account in state schools. In my state, Arkansas, a similar bill was passed only 3 years after the Tennessee bill. After all, it was declared constitutional in 1927, above, so I’m sure the legislators considered it safe to pass with almost identical language here in 1928, and that is what they did. But this time, nothing came of it until 1965. In 1927, just as the evolution law was approved in Tennessee, Arkansas built the biggest, most expensive high school in the nation – Little Rock Central High. In another 30 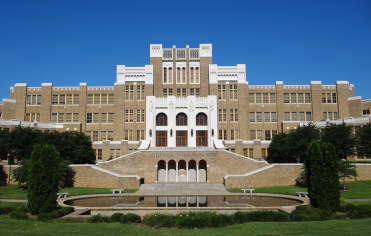 years it would take national attention with its integration crisis, and then in 1965 a teacher named Susan Epperson would make history in the world of religious liberty.

When the books came in for the 10th grade biology class in the fall, Ms. Epperson noticed that the curriculum included evolution. She knew that teaching this material violated the state law and “nevertheless, she persisted.” The short form of this (you can get your own sleep aid – I’m not trying to cure insomnia here) is that she filed suit to declare the state law prohibiting the non-Christian theories to be unconstitutional. The Little Rock Circuit Court agreed with her, but the Arkansas Supreme Court said the law passed muster, and so the debate made it to the U.S. Supreme Court.

Before we get to what the Supremes said, I feel compelled to revisit how this started. Was the debate started when Secularists insisted we take God out of the schools, or was it started when Christians insisted nothing but the Christian God be taught in the schools? From my reading, I’m afraid it was the latter. And I suspect that’s where some people will question my loyalty to Christ, or Christendom, or the Bible. But I’m just calling a fast ball a fast ball.

In 1968, about a year before I was born, the U.S. Supreme Court ruled that the Arkansas law ran afoul of the U.S. Constitution:

Arkansas’ law cannot be defended as an act of religious neutrality. Arkansas did not seek to excise from the curricula of its schools and universities all discussion of the origin of man. The law’s effort was confined to an attempt to blot out a particular theory because of its supposed conflict with the Biblical account, literally read. Plainly, the law is contrary to the mandate of the First, and in violation of the Fourteenth, Amendment to the Constitution. Epperson v. State, 89 S.Ct. 266

So here’s my point: the reason this step of “God being removed from the schools” was carried out was not because some atheists or humanists or secularists wanted to remove God. It was because Christians were trying to force God on people more than He forces Himself.

Once again, God is the inventor of free will.  He doesn’t force man to love Him, or obey Him, or respect Him. He could, but He doesn’t. Because He desires sincere devotion as opposed to forced submission. He knows that Forced respect isn’t respect at all; Forced love isn’t love in the least; Forced allegiance is a far cry from loyalty, and Forced religion is bad faith. So He doesn’t force it. Perhaps we Christians should take a look at ourselves and our methods as compared to His.

3 thoughts on “Who forced it?”