I look forward to this trip every year, for the dual reasons of working with youth at our church camp in Florida and the motorcycle trip down. I pick a different route to the same location every year, and this year I chose to travel a northern route through these southern states, stopping in Oxford,  Tupelo, and Columbus, Mississippi, and then Selma, Alabama on my way south, and then after a week in Panama City Beach, stopping in Orange Beach, Alabama, New Orleans, Louisiana, Natchez, Mississippi, Vidalia, Louisiana, and finally back home.

My trusty motorcycle, Lib (short for Libero – latin for freedom) is my only physical companion. She is a 2006 BMW1200GS and we get along quite well.

After organizing, packing and anticipating for some time, I woke up early Saturday morning to the sound of thunder. As is often the case, dread and reluctance entered my mind before I actually knew the circumstances. I imagined hard rain outside, into which I might be riding a motorcycle in rain gear until I could find the opposite side of the storm. I prepared to adjust my planned route to avoid the worst of the weather, and then I actually looked into the matter and discovered that the front was moving such that i would be surfing the cool back side of the front as I rode southeast.  With the weather threat put aside, I geared up and Lib fired up, and we were off. Cool air with dark clouds to my right and beams of sunlight streaming through lighter clouds to the left as I traveled. Perfect.

But as soon as I began to settle into the hum of 6th gear, the ride felt rougher than it should. I could feel more friction than I should between me and the asphalt. I remembered this same sensation from my last trip, so around Lonoke, Ar, I pulled over and topped off the air pressure in my tires, had a chocolate milk, and hit the road again. Less friction now and crisis averted. Had I done that last year I might have avoided this:

As I type this I’m at the beach, having had no issues coming down. I’m getting smarter and more sensitive to issues that are preventable.

With tires full and smoother and a little nourishment for me, we could now fully enjoy the breeze and the sun without the worry of impending problems. Swarms of dragon flies parting in front of us to make a clear path; the sweet smells of honeysuckle and wet corn fields were only rarely punctuated by the dead skunks, possums or armadillos. 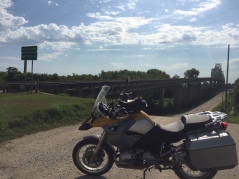 I rode the cool back-side of the front until I crossed the Mississippi River at Helena-West Helena, Arkansas. Then arrived the heat. Mississippi Delta heat. I made it over the bridge and stopped at the Mississippi Welcome Center. I found a security guard half napping in his booth and then enjoyed the crisp cool air inside until a couple of young ladies caught my attention. They offered me money but I declined, saying I would grant their request for free.

It was my privilege to change the back rear tire on their small suv, as they seemed to truly be in distress, explaining they had no idea how to do it or even where to start. They were as friendly as could be, and apparently grateful, as despite my objection they slipped $40 into my belongings as I was sweating over the tires. I felt like I had done some pennance for ill deeds of the past, so we took a pic and they drove away. I cooled off again inside, and then after waving goodbye to the security guard – still resting in the same spot – Lib and I returned to the blistering blacktop on our way to Oxford, MS.

My one and only stop in Oxford was Rowan Oak. The home of the run-on sentence. “Stream of Consciousness” writing was a thing long before William Faulkner used it as a literary technique at this typewriter, but he is surely the artist most noted for it. I tried to soak in as much of his vestigial aura as I could. I regret to say he is several leagues above me, but a guy can admire a talent, right? Me, here, is like a jr. high basketball player looking at Michael Jordan’s used shoes.

To encourage myself, I thought of the common denominator idea: We’re both just men. We sit down and type out what’s in our brains. It’s therapeutic for both of us, and we both struggle with putting the words together in such fashion as to give readers an accurate depiction of the gray matter goings-on. Sometimes it hurts like pulling off a scab and sometimes it’s liberating like pulling off a straight jacket. Sometimes you’re an intruder in the dust; sometimes you’re the dust.

After a short conversation with a couple from Australia, I mounted my steed and made the relatively short trip to the next internationally famous home: Elvis’ birthplace in

Tupelo.  Here’s a guy that makes the math easier and more appealing. Who wouldn’t want to find their common points with a good-looking, famous rock star? Most of us would gladly accept the comparisons and avoid the contrasts.  He came from little and achieved greatness; he had natural talent; he loved his mother . . . We just gravitate to some common denominators, don’t we? If we can find these commonalities with people of recognized success, it encourages us – helps us believe we can do likewise. After keeping my gear in the AC of the Elvis Museum for a bit, I geared up again and moved on. 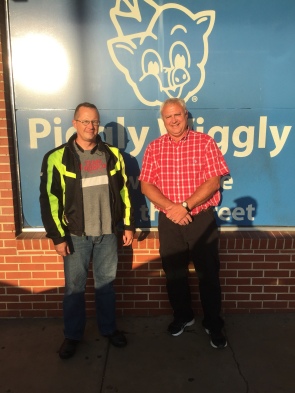 In Columbus would be dinner at Huck’s Place (crawfish enchiladas), but while I waited for it to open, I relaxed on the front porch of Tennessee Williams’ home. You may not recognize the name, but I’ll bet “Streetcar Named Desire” rings a bell . . . (get it?) Yeah well… ok.

When the temps are in the upper 90’s F, it doesn’t take long to heat up while riding a rolling internal cumbustion engine between two wheels. In Eutaw, Alabama, I stopped to cool off at a local Piggly Wiggly grocery store, and as I was wandering through the aisles just to soak up some cool air, the manager spotted a stranger and invited me to stand in his refrigerator. He gave me a free bottle of water as well.

I was on the final leg of the day’s ride to Selma, Alabama now, and the sun was no longer beating down from high overhead as it was earlier. Nevertheless, I have learned the value of back roads over primary roads, and I choose the former over the latter when time allows. One point is that back roads have fewer, if any big trucks that buffet your bike and head with whirling drafts of wind. Another is that back roads have twists and turns where most major thoroughfares have straightened them out. Another is that trees are closer, thereby providing more shade. In short, I would prefer a “County Road x” over an “Interstate x” almost anytime.

Right at nightfall, we arrived at Selma, Alabama and checked in to a hotel and slept soundly after a full day’s ride.

One thought on “common denominators 2/?”