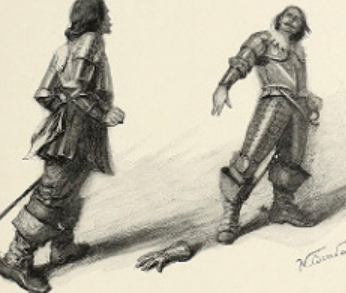 I closed my last essay with questions:

Who is the Nation? Who are the detractors? What values promote freedom? I said I would get to that in the next installment, and here we are.

First of all, who’s throwing gauntlets around, and what does that mean anyway? A gauntlet was, and is, a glove with a big cuff that goes over instead of under the sleeve of the person wearing it, to protect objects from getting caught in the sleeves. Knights wore them when fighting, and threw them on the ground to start a fight.

Today, work gloves are sometimes made this way to protect the worker from chips of wood from a chainsaw, for example, and motorcyclists wear them for protection from cold air, bugs, and rain. But we don’t throw them down to start fights anymore, as far as I know.

People still throw gauntlets, but in the figurative sense rather than literally. David Hogg, (not me) the young man who was at the Parkland school shooting recently, has thrown down the gauntlet. The leaders of the “Me Too” movement and the “Time’s Up” movement have thrown down the gauntlet. I think I could honestly say that all those people who voted for Mr. Trump were throwing down the gauntlet. In medieval days, the knight would take off his glove and throw it on the ground to say “I’ve had enough! Either shut up or fight!” when perhaps his lady or his king was being insulted. These days, most often the figurative version of this happens when someone is saying, “I’ve had enough! Stop abusing me and my people!”

So with all this said about the proverbial gauntlet, I return to the questions with which I stopped last time:

Who is the Nation? Who are the detractors? What values promote freedom?

“The Nation” must, by definition, be the citizens of the United States of America. Whether law abiding or moral or reprehensible or deplorable, the Nation is nothing but its citizens. So the Nation is not the people who have broken in, any more than a squatter on my land is part of my family. I established in the last installment that a “detractor” is someone who insults the nation, inciting a Patriot to defend it.

It stands to reason that if I am insulting, ridiculing, and casting shade on a faction of the legal citizenry of the United States, I am a detractor rather than the Patriot who would defend it. I am the problem, not the solution.

A Patriot defends his or her Nation against detractors and stands for and defends the values that promote freedom. So now, yet again, what are these values that promote freedom? I’m guessing people will disagree on this, but then how can we call ourselves one Nation, if we can’t even agree on some basic common values? Well it’s not easy, but some intelligent citizens of England did it in 1776 – July 4th, as a matter of fact.

Although the Declaration of Independence is not law, as the Constitution is, it is a statement of values and rights, and I submit that as such, it defines the word “Patriot” for a U.S. citizen.

A Voice in Government

Mr. Jefferson believed, as did his colleagues, that each man should have a voice in his own government. Even England was ruled by a House of Commons and House of Nobles, but the American colonies had no voice in either, and to this they objected. This is why the Sons of Liberty objected to “taxation without representation” and staged the famous Tea Party at Boston Harbor. Making sure that people weren’t denied their voice was an element of the Declaration, and it was written into the Constitution from the framing of the legislative branch of our government down to the right of counsel in a criminal case.

The Right of Revolution

I wouldn’t be true to myself here if I failed to point out that the “right to revolution” is a value of the United States but it is not a Christian value. Christian values diverge from U.S. values here.  Where Romans Chapter 13 – as well as many other passages – tell the reader to submit to governing authorities and not resist, the Declaration of Independence claims revolution as a God given right.

“Whenever any form of government becomes destructive of these ends, [life, liberty and the pursuit of happiness] it is the right of the people to alter or abolish it . . .”

So revolution itself is a right and a value of the U.S. citizen, even if arguably not the Christian.

Natural Law as given by a Creator

I’ve pointed this one out before in “He who giveth.” Here’s the famous, or infamous, language:

“We hold these truths to be self-evident, that all men are created equal, that they are endowed by their creator with certain unalienable rights. . .”

Without a higher authority to grant the rights, people would be granting the rights, and if people granted the rights, then people could take them away. So it was a logical necessity for Mr. Jefferson, who did not believe in the deity of Christ, to claim a creator in order to claim “unalienable rights.” It is worth mentioning here, that Mr Jefferson did not

capitalize the word “creator,” as do many of the editors of modern books that quote the Declaration. I believe this has something to do with what creator he was referencing – no specific one.  But, he did recognize the need for the higher power, and as such, established this as a United States value.

One thought on “the values of a Nation”