It’s been brought to my attention that I’ve posted a lot of darkness lately.  People have expressed concern.  I’m fine. I post my thoughts and those are often dim, but vomiting it out is quite therapeutic. So, my apologies and thanks for reading. With that out of the way, here’s a brighter, happier story:

Years ago, when I was engaged primarily in the private practice of criminal defense law, a man from out of state called my office and inquired about my retainer for a criminal case in a rural county of Arkansas. I quoted a retainer that would compensate me adequately for the legal work plus the travel involved, and after he took a day or two to come up with money, I soon received a cashier’s check in the mail for the agreed upon price. I called and explained the process and that there wasn’t a lot to be done until I received the Prosecutor’s evidence, but I offered to listen to his story.  He explained that there really wasn’t anything to this: “I’m just being railroaded,” he stated.

DH –You’re charged with some serious, violent crimes that can put you away for life. You get that, right? Ok, let’s just see what the state’s case looks like when we get the file.

So we waited and I worked on other things for a few weeks. Meanwhile, he called every couple of days, angry because I hadn’t called him yet with the State’s information.

DH — So, do you want me to call you every time I check the mail, just to let you know it hasn’t come in?

IC — Then don’t do that. Just call when you get it.

When it finally came in, I had him come to my office to review the State’s allegations.

DH — According to the police report, your ex says you climbed into a window of her house while she was asleep.

IC — Well then how did she know it was me?

DH — Let me finish and you’ll see – she says that immediately after she heard someone climb in.. .

DH — Please let me finish . . . she said you attacked her with a baseball bat in her bed.

DH — So you’re telling me it was you?

DH — Yeah. Ok. So as this intruder that obviously wasn’t you was wailing on her, her son – YOUR son – comes into the room and “the intruder” turns on him and bites his finger. Off.

DH — So apparently while the intruder was fending off your son’s attack against his mother’s assailant, she called 911 and the intruder got out of the house and ran off into the nearby woods.  When the cops arrived, they found you.

IC — I was getting firewood for the morning.

IC — I tripped over it and they helped me up.

DH — You fought them when they “helped you up.”

IC — It was the middle of the night – I wasn’t thinking clearly. This is BS.

DH — I think we’re going to need a better defense than “this is BS.”

DH — I need a spark to start the fire here.

DH — That simply won’t be persuasive. I’ve done this before, and juries want more than that.

IC — What about the 5th Amendment?

DH — What about it? You want to let them make their decision just on what the state says, that you just heard? Let’s see – Your ex says it was you, your son says it was you, the police found you hiding in the woods, and you had DNA from your son’s finger in your teeth. But no.. you absolutely do NOT have to testify.

IC — I’m being railroaded and I’m beginning to think you’re working for THEM.

DH — This is BS. Let’s stop here. I’ll give you a copy of this to take home. You sleep on it a couple of days and then give me a call.

DH — You need to think seriously about a guilty plea.

IC — I didn’t even DO anything. I know a prosecutor down here where I live. I’m going to have him look over my discovery and call you to give you some ideas about a defense.

DH — That’s great. Give him my cell number.

IC finally pled “no contest” to a reduced charge for a minimal prison sentence. 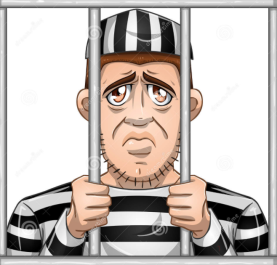 I tell this story for three reasons:

See you next time. Thanks for reading.

One thought on “some people. .”