At this point I was beginning to think of this project along the lines of me trying to do anything else in life just to fit in with others. Pointless. But the dissonance haunted me. On one hand I wanted to accomplish this, so that I would have something to say at social gatherings when the guys were standing around talking about the deer they killed, or the hog they slayed, or the buck they mounted. On the other hand I wanted to satisfy myself that I could simply hunt successfully with a bow, regardless of fitting in with others. On the third hand, or foot now, or whatever, I was ready to admit defeat.

To combat the bifocals issue, I took to the ground. I knew this would make full sensory camouflaging more critical, but at least I should be able to see to aim this way.

I borrowed a ghillie suit from an army sniper friend, washed it to de-scent it, and wore it over some fly-fishing waders. (I already enjoyed fly-fishing for trout and had some success at it – exercitatione) You know the routine if you’ve been reading this series: drove out early, parked, tub, spray, clothes, etc.  This time I waded into the east end of a creek that flows east to west through the acreage, figuring that would help cover any remaining scent, along with the sound of my feet on leaves or twigs, and I would have a lower, less conspicuous profile by being in the creek bottom. “I can’t lose this time.”

So I waded down stream. Bow in hand, arrow nocked. (Don’t bother reminding me that I could have easily tripped in the water and impaled myself with a razor tipped broad head.)  After quite a significant distance I located a spot where the local fauna obviously crossed the stream, and sat on a tree root protruding from the water at the base of a bent tree. It looked like a tree that had either slid down the bank in a flood, but stayed rooted and continued to grow at an angle, or maybe even one that an old-timer had bent over as a sapling and tied to the ground to point the way somewhere decades ago. Either way, it was a perfect seat.

So I sat. I was certain that to any passer by, whether man or beast, intelligent or not, I looked like an innocent bush growing at the base of a bent tree, posing no threat, mortal or otherwise, to any living thing. I waited. Patiently. This is when I realized that rednecks have plenty of time to think. There’s really nothing else to do in this spot but think; to ponder life’s mysteries, to consider politics, religion, metaphysics, your spouse, your children . . . and that’s when I saw her. 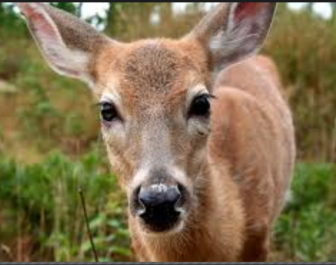 She was beautiful. Smooth brown hair, shapely legs, big doe eyes; and she had that certain walk. Like she knew who she was and why she was there. She appeared in the distant woods and just walked directly towards me, looking deep into my eyes, like she couldn’t decide whether I was bush or man, a vegetable to taste or a predator with a weapon. Because of her constant, soul piercing gaze, I couldn’t move to draw, and even if I could I would have to shoot head on, which was a bad shot to take anyway. She came within a few yards of me, looking straight at my eyes, though I was veiled in the suit and had shades on.

Biologically speaking I was a mess. Sweating, pulse pounding, adrenaline pumping, but motionless. I could have spit on her if I was enough of a redneck to spit well.

She finally cocked her head, turned 180 degrees on a dime, and slowly walked away, with apparent confidence that the bush would not take a shot at her square in the tail. She was right. I went home.