**This is part of a series, beginning with Nativity Walk 1:

After several hours, M & J approach Salim.  After a meal in town and then a wash in the warmish springs of Aenon (where John the Baptist would be baptizing in several more years), they adjust their packs, rinse out their sandals and some of their clothes, and push on.

With the leaves of the willows and pistachio trees along the Jordan changing to their fall colors, and the bougainvillea still flowering, the path was a pleasant walk. The scenery and aromas did not ease the pain of Mary’s feet though, and her due-any-day condition did not allow her to comfortably sit on Mel too long at a time either. She did not complain, though, and Joseph was patient with her need for changes of travel mode and breaks.

But around dusk, the trail wound its way away from the river due to the steepness of the banks, and Joseph noticed that some people were catching up to them. These people gave him an uncomfortable feeling that he couldn’t quite put his finger on, but he simply could not do anything to speed up, and the strangers seemed to be staying behind the couple even though they could easily pass by. M & J finally came to a dead stop to attempt to force them to pass on, but the three men stopped as well.

“What is your destination, young man? What a pretty girl you have with you . . .”

Mary is quiet, with her head covered, as Joseph responds cautiously: “We are traveling south for the census. What about you?”

“Don’t concern yourself with us – what do you have in your bags? You have quite a load there,” the shortest man says as he begins to reach toward a bag on Mel’s closest side.

As Joseph takes a step closer to him to guard the bags, the taller man steps between Mary and Joseph taking Joseph’s attention from his property to his betrothed. The third man slips around to the other side of Mel, spooking the donkey. 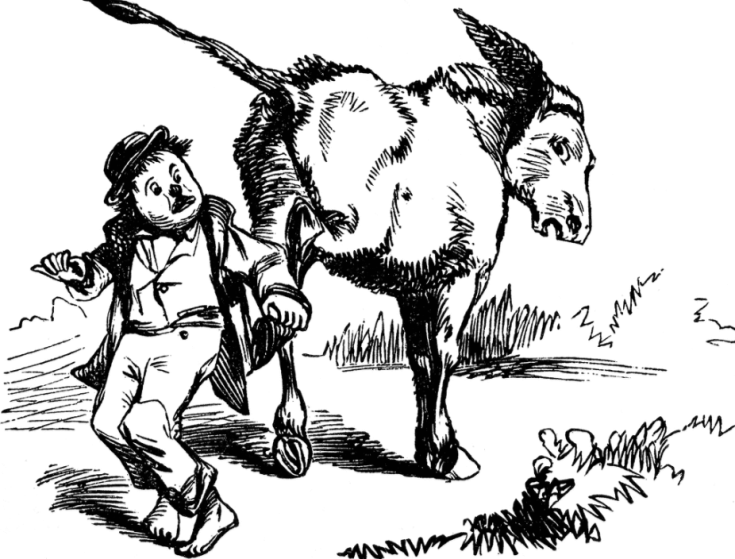 With that, Mel kicks backward, knocking the third man down, causing the short one to laugh hysterically, but angering the short one closest to Joseph, such that he grabs the bag and pulls, further upsetting the donkey, who kicks again, this time throwing the top bag off. Mary just ducks and the bag hits the tall man square in the face. With one man down and one holding his face in pain, the short man recognizes his sudden loss of control and runs down the hill into the brush, with the other men picking themselves up and trying to get away from Mel.

“Adonai is surely with us,” says Joseph.

“Immanuel.” Mary simply says the word and thanks God for His protection.

“Jehovah Nissi,” they say together, and repack the bags from the ground. Joseph stacks a few rocks on the side of the path to mark their thankfulness for God’s protection, as Father Jacob built similar altars to mark the sites of blessings, and they trudge on stroking Mel as they walk.

The path slopes back down to the river after some time, and M & J can now see Abel Meholah in the distance. They will sleep here, in Elisha’s home town, for the night, and given the stress of the day, they are more than ready to stop.