My first experience flying was over the Atlantic and into London and wartime.

My second experience flying was over the Rocky Mountains to Salt Lake City and from there, above Mt. St. Helen’s – still barren from the eruption 12 years earlier – over the Chugach range in Alaska, and touching down in Anchorage, Alaska.  I was officially a missionary now and I somehow ended up seated beside a nun on the flight.  As people heard us chatting, several comments were made about how safe the flight would surely be with a missionary and a nun on it. We hoped so.  Thoughts of the Arctic Circle, Eskimos and dogs that respond to the word “mush!” filled my mind.

As I did for the London trip, I had done my homework beforehand, and I was determined to offer the gospel to native Alaskans in such a way as to respect their culture instead of insulting or demeaning  it as many missionaries had done historically.  As the snow capped peaks of the Chugach became visible, my adrenaline quickened as I knew we would soon set foot in “the last frontier.” We landed at 9:15 p.m. with people to meet, things to do and miles to go before bed. Thankfully, there was an abundance of daylight left due to the latitude.  I met Judy, the State Director, and she introduced me to Phil, my partner for the summer, as well as several others who arrived that evening.  We were then connected to the Pastor of Sunset Hills church and he drove us to his home where we would stay during orientation. Tall, black, smooth mountains rose to one side of us on the ride, and I would soon learn to read the coming weather by the clouds over those mountains, and by the person sitting beside me in the vehicle. I was in bed around 11:30 p.m. with the heavy curtains drawn to keep out the sunlight.

Nine a.m. came quickly. We met our fellow missionaries, learned about the state of Alaska, received some training on missions in general, and received our assignments. As we waited for assignments to be handed out, I met a guy who was just as determined to serve in the “inner city” of Anchorage as I was to find the villages around Fort Yukon at the Arctic Circle.  He and I received our papers to learn he was going to Fort Yukon, and I was staying in Anchorage.  We objected and asked to trade, only to learn that there was actually some reasoning behind our assignments and that they would not be altered.  I was on my way to New Hope Baptist Church. This was exactly what my new friend was looking for. An inner city black church. This would be another link breaking in the chains of prejudice or discomfort around people different from me. Truthfully, I had never found anyone with whom I felt much in common, other than one cajun girl, but as I said in renovo, my high school exposed me to other “races” only in the sense that I worked with them in the kitchen during a free period before lunch, and even in college I was at a private school where most of the students were white and only the athletes were black. I did take the history class in Monroe, but the most interaction I had was with a guitar player in a band I was in, and being called black by the drummers at Richwood High in Monroe.  (When a black drummer calls a white drummer black, it’s a compliment, btw)  I was to be the minority, rather than the majority, here, and I was nervously excited to dive in. I was now convinced Judy was right, and this was where God wanted me.

Before moving out to our respective churches, we were taken on a group excursion to Portage Glacier. The idea that this was frozen during the ice age and is still melting and calving ice bergs was astounding.  Just as amazing is the sure-footedness of the dall ram. What he considered a navigable slope, I considered a cliff. I watched this creature manage the crags with a grace similar to the bald eagles above him. 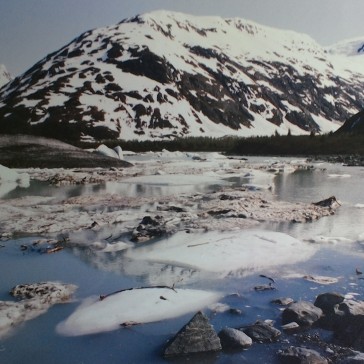 That evening, Phil and I fell into a discussion about capital punishment. He was for it; I was against it.  Neither of us had any first hand experience on which to base our opinions. He finally exclaimed that he wasn’t sure he could trust me if I had the views I did, and I was puzzled at what trust had to do with disagreement. He predicted difficulties in working together for a summer, and admitted problems would come mostly due to his pride.  He was right. The weather was on its way.

My first Sunday was as foreign to me as were the glaciers. I helped teach a junior high boys class, and they were not bashful about the fact that they were from the “hood” and I was a white guy. But the people of that church worshipped. Not like the British did. Not like the First Baptist Church of Wherever did. Like they meant it.  Like they had actually met the subject of their worship.

I would be teaching 5th grade vacation bible school the rest of the week. My challenge, to my surprise, was not biblical principles so much as teaching boys not to call each other “faggot” and not to make fun of the “retarded” (their word) white girl.  Sarah was, in fact, developmentally delayed and this, plus being the one white girl, made her life difficult. I put some hard thought and prayer into how to deal with these problems, as race and cruelty was not part of the bible curriculum I had prepared.

Then God opened my eyes.  How could I fool myself into thinking that race and cruelty was not part of the bible curriculum? What was it, if not that? Is that not the very very thing Christ spoke of in his story about the Good Samaritan and isn’t that the very thing he endured personally as a homeless (Matt. 8:20) Jewish man?

The Spirit of the Lord is on me, because He has anointed me to preach good news to the poor. He has sent me to proclaim freedom for the prisoners and recovery of sight for the blind, to release the oppressed, to proclaim the year of God’s favor. (Luke 4:18; Isaiah 61:1)

This was the stated mission of Christ Himself! My mission was the same.  The message to deliver was not the just the cold, ancient facts of the Old or New Testament – it was the real reason not to call one another faggot, or gay, or retarded.  We have one God, one Creator, and we are ALL made in His image. I was determined now to release these friends (and myself) from the prison of not just general “sin” but of racism, of intellectual pride, and the oppression brought by those plagues. I returned the next day and gave them just that, as God gave it to me. They received it well. I’m glad I learned it in time.

The date was June 12, 1992, and I had finished at New Hope. I learned a valuable lesson and hopefully I passed it on. This missionary stuff was ok. Time for some fresh grilled salmon and a move to my next mission.