Once a year our church hosts a youth camp called “ignite” in Panama City Beach, Florida. I enjoy cooking and serving for groups, as I have done on occasion at my church and on mission trips to Belize, so this plus one or two sons being there provides all the excuse I need for a summer motorcycle trip to Florida.

Last July I looked over a few routes:

After lots of map studying and consideration of time factors, I chose the old friends route and I’m glad I did.  I had no idea what was in store – both good and bad.

Once I determined my route I proceeded to book a couple of hotel rooms: one in the Vieux Carre’ and one in PCB.  I contacted a few old friends and set up rendevous, packed, and left early Saturday morning, July 22.  There are few joys like leaving on a motorcyle trip when you have have all the time you need and no pressing schedule.  Just you, the wheels, pavement, gears and the well, libero (freedom).  I will refer to Lib once in a while, and this her – her hind quarters anyway.  She’s a friend. A 2006 BMW 1200 GS.  She never complains, goes as slow or fast as I ask, and is willing and able to go more places than I have the skill to take her.  On this particular occasion, we were riding into the surprisingly cool morning air, headed south to the Big Easy.

The first leg of the trip was uneventful – light Saturday morning traffic through Little Rock, alternating sun and shade on the interstate to and through Pine Bluff, and then two-lane tarmac to the Louisiana line.  All good.  Smooth divided highway from there to Bastrop, and on to Monroe.  This is where I was born and raised (Autobio).  Here I rolled through the parking lots of my elementary school and high school, remembering good and bad memories, and figuring some things out.  My own Phaedrus (Read Zen & the Art of Motorcycle Maintenance) haunted me only a little as I made this tour, and more so, I was reminded that I’ve made peace with myself and God.

Funny how having peace rather than depression in your mind helps you remember more pleasant aspects of the same memories you’ve always had.

From Monroe, I rolled south on further South on Highway 165.  This is the road i frequently traveled from 1988 to 1991 going from home in Monroe to college at Louisiana College in Pineville.  Back then it was a narrow two lane, and now, sadly, it has grown to a four lane divided highway.  Infrastructure Progress.  Good for people with pressing business  – bad for leisurely wanderers.  This is the road where I received most of the traffic tickets I’ve ever earned, and I counted the spots along the way.

Upon reaching Pineville, I met up with and old friend and part of my adopted family from college.  We shared stories of “mom” helping me solve laundry problems and “dad” pointing out my laziness (driving me to strive to never prove him correct).  I’ve heard before that people have some “friends for a reason” and some “friends for a season,” but both are equally valuable.  These were certainly life-long friends, for more than one reason.  On a very strange note, they told me a story of an angel sighting in Glorieta, New Mexico.  To that day, I had never heard that story from anyone else, and they confirmed it.  Odd.  (dubium)  I am thankful for their role in my life. Interestingly, if I could call the kids of that family brothers and sisters, my younger brother pointed out that I had a slightly low rear tire as I left lunch, and I made a mental note to put some air in it at the first opportunity. But I gassed up at a station without an air compressor and hit the road, worry free.

Just on the south side of Alexandria, which is just across the Red River from Pineville, my IPhone blew off my handlebar holder for the first time ever in what must be a few thousand miles of paved as well as dirt and rock roads.  No warning, no explanation.   Just after the phone flew backwards, I pulled over and began a search along the highway.  I strolled up and down about a half mile of the interstate, hunched over like Sherlock Holmes, using a magnifying glass, with behemoth freighters whizzing by, until I finally found it’s remains laying in the tall grass.

Apparently a pelican case can protect it from dust and water (and some sound), but not interstate speed impacts with asphalt. The bigger problem was that my family monitors my solo motorcycle travels by the location of this phone.  So if it comes to rest in pieces on the side of a highway, they have reason to believe I did, based on a lack of moving signal.  Based on this concept, I made my way to the metropolis of LeCompte and borrowed a phone to let people know what happened and that I was alive and well.  We also arranged for my son to bring another phone for me to the youth camp.  But until then, I would be w/o instantaneous communication for the first time since 1993.  (not quite, but close)

With that settled, though, on I rolled, south toward NOLA, through Baton Rouge.  “Red Stick” as it was named by the indians, was a nightmare of first gear creeping in gridlock traffic under a drizzling sky.  The road was just barely wet and I couldn’t bring myself to stop and check tire pressure because I was already making such bad time.

I finally broke out of the traffic, and made the short trek to Voodoo Town in short work.  After the obligatory fifteen rounds through the quarter to find a parking spot (even with a bike – sad), I pulled up by the Inn on Ursulines to check in for the night.  Now just like a lot of the residences in the Quarter, some of the hotels don’t make their entrances or even their presence, obvious to the partiers who may be looking for nothing more than a toilet.  So once I found the door and someone unlocked it, and entered a met the host, or hostess – whichever.  My host was dressed in purple and pink silk or satin leggings and blouse, with a pink mohawk and heart painted above the left ear.  I gave my name and the host politely explained they had no vacancy.  I explained that I had a reservation and heard that David Hogue’s reservation was for “next saturday – not this saturday.”  This was disappointing.  As much as people talk about gender identity confusion, this individual was not the victim of confusion.  He knew what was going on and he helped me find a new room for the night.  Even when I asked “what idiot screwed up my reservation? He calmly answered, “It says here David Hogue made the reservation for next weekend – is that you?”  I soon settled into another spot a few blocks away and then made my way back out to find dinner.

I don’t do well with loud music, crowds, or crazies.  “Sooo, why in the world would you choose to stay in the Quarter,” you say?….  Good question.  I just wanted to have the experience.  And it was. An experience.  As I was on the bike again because my new room for the night was not quite in walking distance, I made the required 15 rounds to find a parking spot and finally parked close to Maspero’s.  Perfect.  The streets of downtown seemed especially rough, in a wobbly tire sort of a way, but they are centuries old and in visibly rough condition.  Maspero’s is a great little cafe that has been here since 1788. That means before Marie Laveau, the voodoo queen, was even a toddler wandering around the french settlement, or a young adult sacrificing her first chicken or goat to the Santeria gods Shanga or Babalawo, well before the civil war, this place was serving gumbo.

Dinner was “sa’ c’est bon!” As Lib and I rolled back to our shelter for the night, I witnessed a New Orleans brass band leading a party down Rue Chartres with their ragtime groove.  A perfect dessert to my meal.  I went to sleep with my glock loaded and chambered by the bedside, but was never disturbed.  The next morning I rose, packed up, and moved down Ursulines to Cafe du Monde for breakfast.

See anything wrong with Lib here? Me neither. So after my beignets and a good conversation with a veteran who shared a table with me, I hit the road, shifted up through the gears, and made my way to Biloxi, Mississippi to hear another old friend preach the Sunday morning sermon at his church.  By the time I reached the correct exit for his church, Lib was waddling like an eight and half month along woman pregnant with twins.  I pulled into the closest gas station and sidled up to the air compressor to dismount and find this: 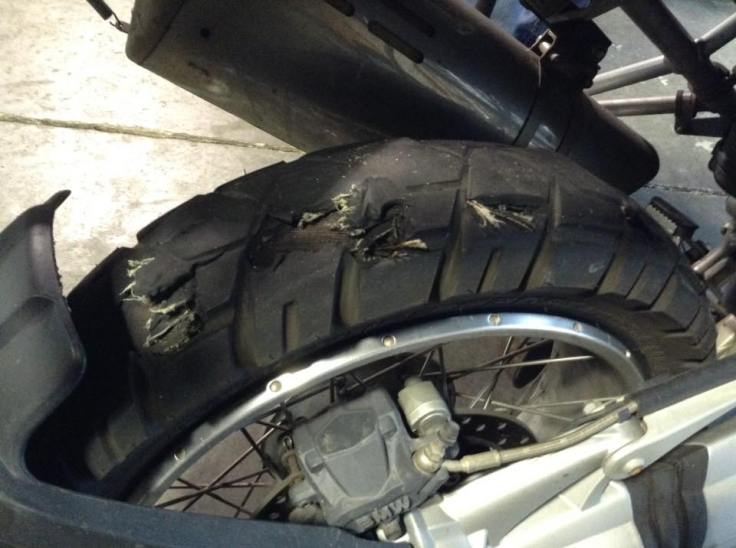 Not good.  I called my pastor friend and explained my circumstance.  Being the sarcastic, irreverent, often obnoxious minister that he is, he picked me up, gave me a ride to church and lunch.  We soon discovered that no one replaces motorcycle tire on Sundays, so he and his wonderful bride put me up in their home for the night after getting my crippled Lib into a trailer.

Monday morning I woke up to sheets of gulf coast rain beating against the window.  I took the bike in the trailer to a local suzuki dealership, and by a stroke of luck (or God’s grace) they had the right tire for my bike and nobody in line before me.  In an hour or so I had a fresh new tire, full raingear on, and was cruising east into the monsoon.

The weather cleared as I rolled eastward, and I made it to Panama City Beach around 2:00 without a problem.  The beach, the camp, and the bus with my son on it.  He gave me a replacement phone, and I salvaged the sim card out of the old one to bring the replacement to life.

Given my mind altering medications, I made it through youth camp successfully, picked up a new front tire and cell phone holder at the Pensacola BMW dealership on the way home.  Stopping for gas in Pine Bluff, a mostly toothless woman in the passenger seat of an 1980 something pontiac got my attention and stated “You’re sexy.”  This was the first time anyone, to my knowledge, had EVER used that word with reference to me, so I had the next customer take a photo.

I rode comfortable and happily the rest of the way home to Conway, arriving safely in my garage.

As the sage Winnie the Pooh said, “Home is the comfiest place to be.”